Two Bedstone girls are part of the Ludlow under 12 girls who are off the Beeston for the Midlands Finals of the ENGLAND HOCKEY under 12 GIRLS IN2HOCKEY competition.

Pip B (captain) and Tilly B joined forces with players from four other schools, surprised coaches and supporters with an excellent performance in the Shropshire rounds of this competition.

The Midlands finals are on Sunday 30 April at Nottingham Hockey Centre in Beeston. 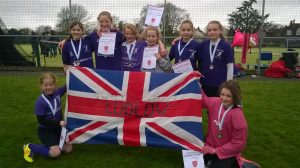