Hopton win the trophy at the Inter-House Art Competition

The Inter-House Art competition and Soirée were held on the afternoon of Friday 16th June 2019. Each house presented 8 artworks in a variety of media, two in each of the age categories; Junior, Lower, Intermediate and Senior. Many of these art works were made especially for the competition and it was great to see so much effort and ingenuity going in to their creation.

Our adjudicator this year was Mr Andrew Hazell, an artist who works locally but whose sculptural output can be found both nationally and internationally. He spoke to the pupils about working from their feelings as well as their experience, allowing the ‘wobble’ to play its part – in other words, to allow the unexpected and so called ‘mistakes’ to enrich the work – making it more fresh and lively than an overly controlled work. Hopton were the worthy winners of the trophy this year and individual age-group winners were –

It was a great pleasure to see so many members of the Bedstone community gathered together to celebrate the pupils’ artistic achievements.

Congratulations are in order to all the pupils prepared to enter the competition and support their respective houses, but particularly those prize-winners in both the official and popular competitions. 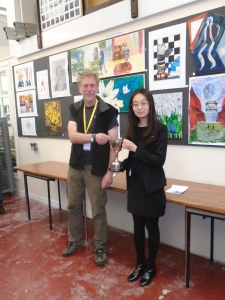 Rebecca W receives the trophy on behalf of Hopton House.

Year 6 are Moving Up
Scroll to top