Rain may have stopped play for a couple of hours but nothing deterred the Girls Cricket Team from enjoying a fantastic day out. On Sunday 9th June they watched England v West Indies at the second women’s one-day international at the Blackfinch New Road Cricket Club in Worcester.

The students had a fantastic day and were a credit to the school. When play was stopped they entertained themselves by playing a game of Cricket under the stands. Ever ingenious, and much to the amusement of passers-by, this started off with a cling-film ball and a bottle for a bat!

It was brilliant to see England win the heavily rain affected match. The girls really enjoyed the day, which was topped off with numerous photographs and autographs from the England players. Miss Ross said: “We had a great day out and the team were inspired to watch and meet professional players”. The Girls Cricket Team have been making excellent progress this term, they have been introduced to the hard ball game alongside playing pairs matches. They have been doing really well with their bowling and their fielding is constantly improving. They have had some excellent results so far this season which include a dominant win against Christ College Brecon and also a 1 run win off the last ball v Winterfold. They have also played some challenging games against older teams. 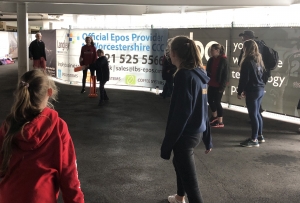 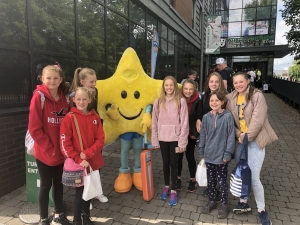