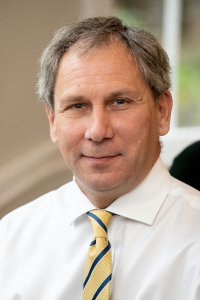 Mr Toby Mullins has been a Head for over twenty-two years with a track record of success in a range of schools, with a high profile in the education sector as Chair of both the Society of Heads and the Independent Schools’ Council.

He is immensely excited at the prospect of leading Bedstone College through a period of positive change, bringing a wealth of experience and insights to establish a future-proof vision of growth for the school. Underpinning this transition will be clear aims to guide each aspect of school life and strong values resulting in an enhanced Bedstone identity and experience.

Beginning his career in King’s Bruton, Mr Mullins was appointed Head at Seaford College in 1997, when the school had fewer than 300 students and a poor reputation in the local market. In the following 15 years, Seaford embraced full coeducation, increased its roll to 650 (including the creation of a Prep School) and is now one of the most popular schools in the area.

In 2012, Mr Mullins was recruited to join the David Ross Education Trust (DRET) where he became Executive Principal running two academies. In late 2013, he led the successful DRET bid to start up a Primary Free School on the site of the senior academy in Northampton. In September 2015, Mr Mullins was recruited by the Reddam House group to setup their European flagship school in Wokingham, Berkshire.

In addition to his work with the Society of Heads and the ISC, Mr Mullins has previously been Chair of the Society’s Education Committee and member of the HMC Education and Academic Policy Committee. He has been an examiner at A Level, an ISI Inspector, Chair of Governors in two Prep Schools and is currently on the Board of Trustees for the Children’s Trust, a national charity for children with acquired brain injury, and Chair of Governors for their Special School.

Mr Mullins and his wife, Carol, have two grown up boys, who are themselves both teachers. He is a keen sportsman and has been a Level 4 Coach for England Hockey and has coached England International Teams at Junior level.